Is Cryonic Suspension Worth Considering? Is Cryonic Suspension Worth Considering?

Cryonic suspension means to have your body frozen after death with the idea to revive it sometime in the future when humanity supposedly will have advanced to the extent that they can bring you back successfully, so that you can live on in the same body after thawing. According to the website Cryonics (https://cryonics.org/) cryonic suspension promises a lot of benefits: get another chance of life, experience the future, live an unlimited life-span, have renewed youth and health, reunite with your loved ones (future grandchildren and great grandchildren), give a new life to a beloved pet, be cured from today´s illness by the supposed medical  advances of the future, preserve human organs and endangered species.

All this sounds very promising and today four companies offer cryonic suspension –three in the USA and one in Russia. It is estimated that 250 bodies are now in storage at −196 °C or −320.8 °F in the USA and that 1500 people are on lists to undergo the procedure when dead.

This procedure is very costly  – the exact price is not informed but estimates run from $80.000 to $200.000. The fact that such a “service” is offered reflects the extreme fear that people have of dying; it reflects the never-proved idea that we are identical to our physical body and the firm conviction of many that we only live once.

It also reflects an extreme degree of spiritual ignorance.

Today a lot of people find themselves spiritually bankrupt and they have become atheists, agnostics or godless. This is due to the illogical nature of most religious teachings. Those teachings cannot stand for an intelligent scrutiny based on logic. It makes no sense, for instance, to adore a god who subjects his beloved son to a gruesome crucifixion so that a bunch of wrongdoers, sinner and murderers can go free from punishment. This is not a loving god, but one who would spy on us zealously to see if we behaved. It is a god to fear and not one to love.

No wonder that modern, well-read individuals with high morals and ethics, with compassion and altruism in their hearts, must turn elsewhere to find spiritual nourishment in their times of need.

A lot of the dogmas of religion are meant to appeal to our instincts and feelings and not to our intellects. But as we evolve, our intelligence grows, our instincts diminish and we begin to demand intellectually stimulating explanations to the mystery of life. These are exactly what Martinus offers in his spiritual science and they are a breath of fresh air among the cobwebs of the old dogmas.

Martinus on the non-existence of death

In his extensive work Martinus points out again and again that we are not identical to our physical body, which is merely a provisional instrument for our sojourn on the physical plane. Who we really are is our “I” and consciousness. Our “I” constitutes the core of our consciousness and both consist of what Martinus calls “ray-formed matter” or energy. We cannot see ray-formed matter or energy because its vibration lies beyond what we can perceive with our physical senses.

But it is a fact that invisible matter exists and we use it every day when we speak on our mobile phones, when we watch TV, listen to radio, use GPS and X rays. Claiming that invisible “stuff” does not exist is disproved every second in our modern world.

Another example that we all know of ray-formed matter is our own thoughts. Nobody would deny that their thoughts exist. But our thoughts are invisible and intangible. Yet their existence is irrefutable and of extreme importance to our actions, decision-making and forming conclusions. We cannot live without thoughts. The totally of our thoughts constitute our consciousness, which sits around our body in the shape of our aura. It is not limited to the brain and it is identical to our life-force.

When the physical body becomes useless as an instrument for the “I”, the “I” with its consciousness in its energy field pulls out and moves on to the spiritual plane for a good long rest before it is time for it to reincarnate in a new physical body.

It is a huge relief for the “I” to pull out of a body that no longer serves any purpose and is sick, lesioned and worn out. It is not a tragedy, it is a blessing. But because we cannot see the spirit with its “I”, we now think that the whole person has died and ceased to exist. This creates sorrow, fear and an outright horror of death. But this perception of death is an illusion.  The being that existed behind the physical body, the real master of the body, is still very much alive. It simply cannot cease to exist due to the eternal nature of its spiritual energy body.

Martinus puts it like this in his article: “The ”I” and eternity”:

“Death” does not constitute an absolute or real death

The fact that the physical body thus perishes, whether by lesion or wear and tear, does not mean that the “I” perishes. It can only no longer manifest itself in physical matter. This is why the survivors come to the conclusion that the being or “I” in question, which manifested itself through the organism, is dead, which here means: has totally ceased to exist. And it is this perception or belief that the life and existence of the being totally ceases with the liberation of this “I” from its useless physical body or physical sensory apparatus, that creates the survivors’ fear and horror of death, just as it also creates grief in the surviving friends of the “dead”, since they can no longer experience him or her on the physical plane. But this perception of “death” is thus very much an illusion. Death is absolutely not a real death. (Martinus: Article: ”The “I” and eternity”. From the small book no. 27: “The Creation of World Peace”.)” My underlining added.

The supposed reason why cryonics exists

It is a proven fact that freezing organic matter and then thawing it works in many cases. When we freeze a steak, we see that it can keep for a long time, and when we defrost it, it is still edible. But what happens at the cellular level must not be confused with what happens to a whole complex body with an “I”.

When we freeze a steak, the “I”s that inhabited the cells are forced out of the once living matter and in that way, the cells die. They remain dead for as long as the steak remains frozen. But then when we defrost the steak, the cells come back to life. The individual muscle cells of the steak are now alive again!

This has led scientists to conclude that after freezing and then thawing, the same life units that inhabited the organic matter have come back. But that is not the case at all.

But after freezing and defrosting, the steak or strawberry or pea will taste different from before it was frozen. It does so because it is now no longer the original  “I”s that inhabit the cells, but different and slightly inferior “I”s that have reincarnated into the defrosted matter. The more times you freeze and defrost a steak, the worse it will taste, because with each defrosting, inferior life units or “I”s will reincarnate in it. (The above is an example. You absolutely must NEVER refreeze meat of any kind for human consumption as it’s highly dangerous.)

This process only works on cellular level. As soon as we have a multi-cell organ, the process of reanimation after thawing does not work. The reason is that also our organs are individual living beings with an “I”. When we freeze a whole liver, for instance, the “I” that was reincarnated in the liver is forced out and will not come back to the same liver when it is thawed. The cells of the liver, however, may be revived but the organizing unit of the organ, i.e. its “I”, is no longer present in the liver and this means that it will not function as an organ. The individual cells can be alive after defrosting, but the whole organ as such is not working due to the lack of the organizing principle or “I”.

When we come to the multibillion cell structure of a whole human being with a multitude of organs that are individual living beings plus a whole complex functioning organism, getting this to work after thawing is not possible. The structure is too complex and too many individual “I”s are involved. Reviving a whole organism after defrosting and making it function as a human being is simply not possible. It is, somewhat ironically, a dead end.

What works is the way nature intended: reincarnation in its natural form.

When the physical body of any individual is no longer functioning, the “I” of that body pulls out as already explained. It will move on to the spiritual plane for a good long rest and, when it is ready to reincarnate, it will be attracted to a lovemaking couple on the physical plane and will reincarnate into the fertilized egg in the womb. This happens immediately after conception and it is the “I” of the incoming discarnate being that holds all the necessary information for the creation of its new body. This bodily creation is hugely complicated and it would never take place without the load of information embedded in the energy field / consciousness of the discarnate being or 3rd party of the process of embryo-genesis.

And when this new physical being is reborn, it can, as promised by the cryonic companies: get another chance of life, experience the future, live an unlimited life-span, have renewed youth and health, reunite with its loved ones etc. And it is totally free and involves no prepayment. But not only that: it can continue its evolution towards becoming a finished, all-loving human being and thus participate in the creation of a peaceful world.

To learn more about how the process of embryo-genesis takes place, please read my short book: The Best Available Evidence for the Survival of Human Consciousness after Permanent Bodily Death: 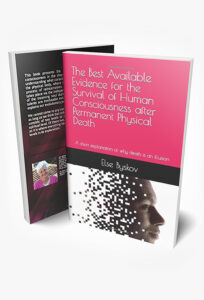